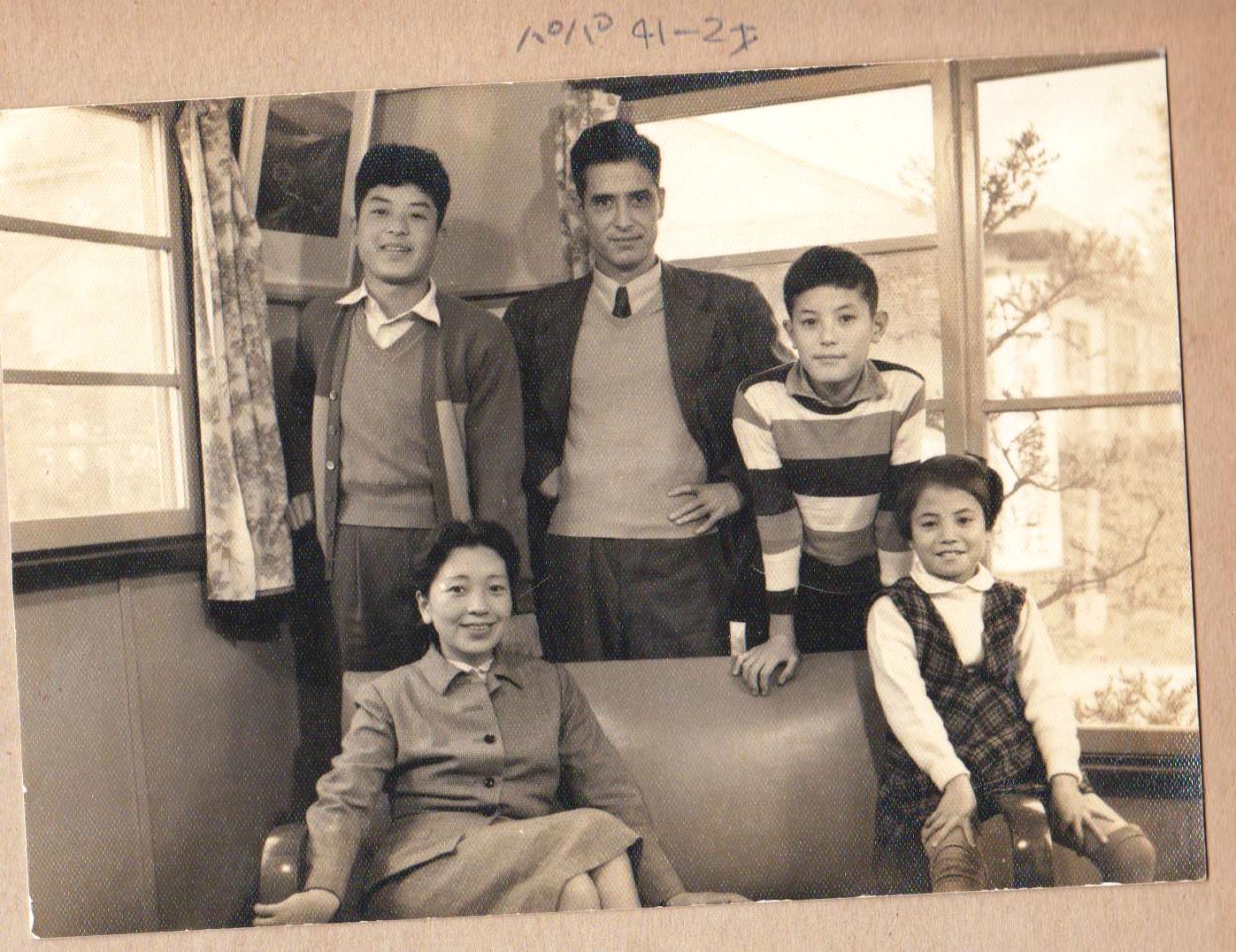 My father, Eric Masakazu Shimada (1912-2010), came to Brisbane on a permanent residency visa in December 1998 at the age of 86. He passed away on the 30 August 2010. You may think living here for 12 years towards the end of his life would not provide much of a story from the perspective of the Japanese diaspora in Australia. However, my father had been deeply connected to Australia since his first encounter with the Australian army at the end of the Pacific War, and the work he did for ATIS (Allied Translation and Interpreting Section). I am sure his experience then also left an impact on his three children.

Eric was born in Asakusa, Tokyo in 1912 to a Jewish-German businessman, Eugen Von Wohlgemuth and a Japanese mother, Ei Shimada. At the outbreak of World War I in 1914, Eugen was deported to Germany. After the war in 1923, he managed to return to Japan to take his Japanese family to Germany, but his wife Ei decided to remain in Japan. Eugen died three years later. It is possible to say that his wife’s decision not to go to Germany turned out to save the lives of the family members.

Eric completed his secondary schooling on a scholarship, but he had to support himself through university. He studied economics at Keio University, while working as a copy boy with Havas, a French newspaper company (later Agence France-Presse, AFP). After finishing his studies, he continued working as a correspondent with Havas where he developed his French skills on the job.

The story of my father is based partly on what my father recounted to us, on historical records, and on letters sent by Mr Ian Kennison, the former Director-General of the Australian Secret Intelligence Service (ASIO) between 1975 to 1981 after his retirement, recalling the War Crime Trials that took place in the Indonesian islands of Ambon and Morotai.

My father was inducted into the Japanese army in 1943 as a Private Second Class, and was serving in the Talaud Islands in October 1945 when he was noticed by an Australian reconnaissance party, which, following the cessation of hostilities, had been sent to locate and disarm smaller Japanese garrisons on outlying islands. Eric’s language skills were recognised, and he was taken back to Morotai and recruited into the Allied Translator and Interpreter Section (ATIS) as an honorary sergeant in the Australian army. Late in 1945, the Australians posted him to Ambon for duty at war crimes trials.

His English skills began to develop only after WWII. The Havas was restructured and renamed Agence France-Presse or AFP, and began to produce news in English. Eric went to Columbia University in the US on scholarship to study Masters in Journalism in 1949. He returned to his position at AFP after his studies and stayed thre until 1969, 24 years after the war ended. When my father retired from his career as a journalist at the Tokyo Bureau of AFP, he was 57 years old.

At that time, I was in Sydney working at the Consulate General of Japan in the Information Section.  The Consul-General at the time, Mr Tanetani, recruited my father to be the editor of the Japan Information Centre English language newsletter. My father did not hesitate and joined me in Sydney in early 1970. Later in the same year, my mother Toyo, joined my father in Sydney, though I had by then already returned to Japan to finish my university degree. It was my mother’s first time to live overseas.

In 1971, my older brother, Tsuyoshi, married an Australian woman. She had stayed with us in our Tokyo home for a year in 1969, while studying Japanese. So, between 1969 to 1971, the Shimada family experienced a number of changes that brought our lives closer to Australia.

Another twenty years or so passed, and by that time, my parents were back in Japan enjoying life in their retirement. Around 1990, my brother in Sydney, Tsuyoshi (Richard), was contacted by Mr Brian Williams, the son of Judge John Williams, who had been the Australian prosecutor at the Ambon War Crimes Trials back in 1945 – 46.  Brian was the script-writer for the movie, Blood Oath (1990), and the story was based on Judge John Williams experience at the war criminal court held at the small Indonesian island of Ambon. As John remembered my father as his interpreter for the proceedings, and my father had a very fond memory of him from that time, the two sons, Tsuyoshi and Brian, had planned their fathers’ reunion after 45 years.

John had previously asked my father to meet him in Tokyo when he was helping to promote his son’s movie there in 1990, but my father declined, probably avoiding the spotlight he did not want, as he was like that as long as I remember him. They eventually met in Sydney while my parents were visiting my brother’s family in 1991. What those two old acquaintances talked about then, I do not know, but I have a photo taken at the special reunion in the backyard of my brother’s East Roseville home in Sydney.  My parents, Tsuyoshi, Judge John Williams and his son Brian were together for the occasion.

Experiences in the Australian army

My daughter, Tama, was interested in her grandfather’s life story. She interviewed Eric when he was 90 years old. The following interview was conducted in 2003.

‘I arrived back from Indonesia to Kure with the ‘first-wave’ British Commonwealth Occupational Forces Unit, probably because of my Japanese speaking ability. At the time, the first postwar democratic election was scheduled in Hiroshima, where the atomic bomb had been dropped, and I was sent there to help as well. Kure is next to Hiroshima City and there was a military base. I rode a jeep with the occupational forces every day to the city and stood next to the ballot boxes to make sure that no fraud took place. Even though I was also Japanese, people took me for an Australian then. Neither rigging nor sabotage took place of course, and it all went smoothly.  Japanese are like that, you know.

‘Before arriving back to Japan from the south, an Australian military officer (perhaps an intelligence officer belonging to ATIS) had asked me if I wanted to become an Australian. I said “yes” then, without considering the situation back home in Japan. At that time he explained that the easiest way to do so would be to treat me as a “stateless person” who was missing from the Japanese Army during the combat.  I didn’t really understand how it worked, or what it meant, so I said to him ‘”whatever procedures that are convenient for you”.

‘This was back when I was still working [Note: from late 1945 to early 1946] with the judge John Williams; his rank was Captain and the prosecutor at Ambon court and Morotai Island [Note: the Molucca Islands, currently part of Indonesia, were occupied by Japan during WWII but was a Dutch colony before that].  But after a while I became less indispensable to them.  Around that time they also found that I was married, and had a Japanese wife and two young children in Tokyo.  I guess by that time they came to the conclusion that it would be problematic, if I was to become an Australian.  However, they were very sly and didn’t tell me that until later.  The intelligence officer [Note: most probably Mr Bruce Padman, could have been posted back home in Australia or stayed back with ATIS in Morotai], who used to tell me things had gone back home and was no longer there when we were in Kure, and someone else was supervising me.

‘Right around that time, General MacArthur was organising the Tokyo War Crimes Tribunal, and a memorandum was sent out all over Japan &amp; Allied Occupational Forces requesting translators and interpreters and that they should be sent to Tokyo.  Perhaps they thought it was a convenient way to solve their predicament. [Note: they had invited Eric into the Australian army and offered him an Australian citizenship although they could not allow him to bring his Japanese wife and children to Australia.]

‘Norman Sparnon, who later became a famous master of Japanese Ikebana (flower arrangement) and eventually started the Sydney branch of the Sogetsu School, was a Major in the Australian Army at the time, and was a very kind person.  He came with me to take the translator (interpreter) examination in Tokyo and went through a mock trial interpreting session.  I somehow passed the exam.  But instead of leaving me and wishing me luck, he also pointed out that I needed to go through the proper procedure to return to being a ‘Japanese civilian’. That is, if I didn’t return from war as a Japanese soldier, I wouldn’t be able to receive my rations of food.  So he brought me back to Kure and put me on a small Australian ship and took me to a place where Japanese troops returning were being processed, something like an immigration checkpoint.   My Australian military uniform was taken off, and  I went in alone (in what clothes, did I have, I wonder…) and the Japanese Officials and other Japanese soldiers there were amazed that I had made it back alone from the Southern islands.  It was hilarious to me.  But at that time everything was in a state of chaos, so they didn’t complain.  I wrote down the name of my unit (of the Japanese Army) and received my tickets for the rice rations, and went back to Tokyo as a civilian.  This was all after I passed my exams (to be a translator/interpreter for the Tokyo War Crimes Tribunal). Because of the reason mentioned above, I had to be taken back to Kure to be discharged from the Australian (Commonwealth) forces back to the Japanese authority.  I thought they were very cautious (about that process). After that for me, was the Tokyo War Crimes Tribunal.’

My father often said to us, ‘if you learn languages, you would never be out of work.’ He acquired French and English, however, he was put off by German as he was forced to learn it by his grandmother when he was a child.

My older brother also went to study in America and later became an interpreter at the Tokyo Olympics. As I mentioned earlier, he married an Australian and moved to live in Sydney. I also followed the steps of my father, migrated to Australia and completed a PhD in translation in Brisbane in 2004. I was 57 years old when I completed my PhD.  All of my siblings’ decisions to move to Australia were influenced by our father’s life history.