The Cowra Canowindra Community Arts Project was a series of arts workshops in performance and storytelling involving community youth artists, youth arts workers/artists, and cultural organizations from Cowra, Canowindra, Bathurst , as well as visiting professional artists in residence. The results of these workshops were presented during Civilian Internment Arts Program and Festival of International Understanding in Cowra during March 2014 and the 70th Anniversary of Cowra Breakout Commemorations in August 2014. The project’s aims were to further Cowra’s community heritage of civic peace and reconciliation, and to shed light on the little known history of civilian internment in Australia during World War II.

The project blog is here

Read about the experiences by participants

Participants learnt the entire process of documentary making from professional documentary makers, including story boarding, interviewing, visual and sound recording, and editing. Since, the participants and facilitators have been working as the Civilian Internee Documentary Team to document other arts workshops as part of the Cowra Canowindra Community Arts Project, creating art videos and working on a documentary about civilian internment in Australia during WW2.

Read about experiences by participants

Participants learnt how to create contemporary shadow theatre by Indonesian Australian artist Jumaadi, including hand making of shadow characters with inexpensive materials and poetic narrative to create a shadow theatre performance inspired by stories of Indonesian civilian internee families who were interned in Cowra during WW2. Jumaadi will return to Cowra during the Festival of International Understanding 2014 (March) to perform the completed work with the community.

Read about experiences by participants

Participants created text for voice work from their own family histories, learnt movement skills, then worked site specifically at the Japanese  War Cemetery in Cowra and explored transcultural motifs of spirits, place and family legacies. 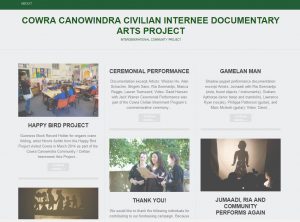