My Life Story by Iseko Williams 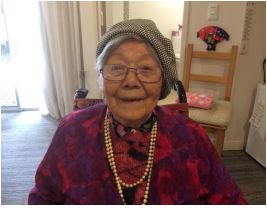 Iseko Jenny Williams kept a record of her life in Japan and Australia. Iseko’s interviewer and biographer, Hiromi Ogata, interviewed her between August and September 2018, and published the story of her life as 伊勢子ウイリアムスの自分史: Iseko uiriamusu no jibunnshi (My Life Story). The Japanese original was translated into English by Ayako Takada and Dr Yuri Furuno. The following is an abridged and edited version for the Nikkei Australia website.

My maiden name is Iwasaki Iseko and I was born on the 29 September 1921. I was the third female child to be born to my parents in Kurodori, in the Kawakami district of Okayama Prefecture. I had eight siblings, but none of them are alive now.

My father worked in the timber industry in America for two years and sent his earnings back to Japan every month. While he was there, he took night-school English classes. Later, in Japan, my father worked for a marble company and when foreign traders came to buy marble, my father spoke to them in English. Maybe because of that I became interested in the language. So I later studied very hard at it in my high school days.

My mother was small, very pretty, and a hard worker. The house we lived in had seven rooms with a thatched roof. She used to collect night soil from the cesspool and used it for the field. She was not from a farming background, but from a fishing family, and she had to learn how to grow vegetables from her neighbour. She used to get up very early, and she told me she became strong.

As a child I had to study very hard, but I also worked growing vegetables. We tried our best, even though things didn’t always go our way. My school teacher used to tell me, ‘even though you are might be feeling very sad, don’t be defeated by it’. But we children in the village also played games and there were fun times to be had, skipping, racing, tossing beanbags (otedama) and so on. There were about ten of us kids, and there were lots of open spaces for us to run around.

I remember going to school with an apron on, a white one. I always came third in the class, but just one time I came first. I was really happy thinking, ‘hooray, I finally did it!’ At night, when I was studying hard at my desk, my brothers Tomo and Teru would interrupt me by saying, ‘you can study and go to school, while we are working to support you’. They would tease me by taking away my pencils and rubber.

My sister Tai was a nurse, so I decided to become one too. I thought it would give me an independent income, and I could support myself. After the fourth year of primary school, I passed an exam to be a trainee. When the war came I wanted to help my country, but before I had a chance to do so, Japan itself became a battlefield. Bombs were dropped from airplanes, so everybody wore padded headgear for protection. It was horrifying, as we did not know when the bombardment would start. We all went to hide in the air-raid shelters many times.

There was a strong flash of light and then there was a long rumbling sound that we had never heard before. We could see a very black cloud swirling up in the sky. There was a radio broadcast saying an atomic bomb had been dropped on Hiroshima city. We didn’t understand what that really meant.

Bob was a Health Officer and he was a truly kind person. He was great with everyone. When Bob came to Japan he bought himself books to study Japanese. He was also asked to teach English and he became a very popular teacher. One day there was a notebook on his desk that he forgot to take home. When I looked inside notebook, I saw that he was single. He was 41 years old, but because of his grey hair, he looked about 60. However, he was youthful and energetic and he was a truly sweet and romantic guy for me. Bob patiently proposed to me for over four years. He said, other Japanese girls are getting married to Australian soldiers. Why is your answer ‘no’? I replied ‘I like you, but your country is still under the White Australian policy’. Bob said, ‘ah, you’re right’. Australian troops would go home and their Japanese wives were left behind with their children. Grandmothers were holding grandchildren with blue eyes. Bob didn’t give up and he used to bring fresh tuna to my mother, which was very expensive then. My mother then said to me, ‘Iseko, everyone says it will be a lot more trouble if you stay at home as an “old miss”, so you marry that person’. Finally I said yes, and within two weeks we decided we would have a wedding ceremony at the church in Hiro.

After the occupation ended, Bob was returned to Australia with his army group, and because they were gone, I lost my job. My husband applied to the Australian Immigration office and I received a document from the government that said I was welcome. I was so happy! On the 1 June 1955, I departed from Kobe port to Australia. My two older brothers came to farewell me. As the ship left, they shouted their farewells to me from the dock. My last thought was, ‘when will I be able to come back to Japan?’  Someone said to me, ‘there are many relatives sadly saying farewell, but you are smiling. Why aren’t you crying?’ I explained, ‘we haven’t seen our husbands for months and years and they are waiting for us! That’s why I can’t stop smiling!’

When we arrived in Sydney, Bob came and met me. We went to places like the zoo to see kangaroos and koalas. After that, we went to a hotel where I met Bob’s Sydney relatives. The next day we took the train to Cooroy on the Sunshine Coast in Queensland where Bob’s family lived.

Our home was close to Coopers Plains Primary School. The land was divided into three-quarter-acre blocks, and the train ran next to our home. There were 81 trains a day. It was so noisy, but after a while I didn’t even notice it.

We were called returned soldiers’ wives. About 20 of us made a club and we gathered with our children at the Coopers Plains RSL. Everyone was nice and we did things like visiting the museum and playing with the children. I didn’t know much about Australia, so I followed what they did. Back then, we went to church every Sunday.

When I was 32, I gave birth to our son Gordon. Bob’s mother, my mother-in-law, was a midwife. She was such a nice person, and when Gordon was born, she came and visited us the very next day from Gympie. She came to our place every three months to stay for a couple of weeks. Gordon was a happy child and Bob was truly proud of him.

He was the top student in class, you see. One day, Gordon said to me, ‘I want to be a doctor’. I replied, ‘you have to be number one in class’. He asked, ‘so, how many points do I need to get?’ I said, ’95 points out of 100′. Every year from then on, he had 95 points out of 100! The night before Gordon was due to sit the entrance exam to medicine he had a car accident and couldn’t complete the exam. That’s why he became a scientist instead.

Gordon doesn’t know Japanese at all. I didn’t wish to teach him Japanese because I wanted to raise him as an Australian hild. I don’t think I was lonely because of not being able to communicate with him in Japanese. Because I had learnt English in Japan, I was not worried when I came here, but I felt I had to improve my English, so I studied via distance dducation through a program where migrants were taught English for free for three months. Later I worked as a nurse at the Princess Alexandra Hospital in Brisbane.

Bob passed away when he was 84. After I went into a care facility, and in 2016 I developed a serious infection in my leg and they told me that they needed to amputate to 15 centimetres above the knee to save my life. I was a bit sad, but it was sewed neatly and I am lucky I didn’t die. I turned 97 on 29 September [2018]. I reflect to myself: ‘I truly did live well. I, who was a poor child.’

Once before when I went back to Japan, I paid a visit to my family grave. The cemetery was located on high ground through a temple gate. The monk of the temple told me, ‘you go over the top of the hill, and the white one is your family tomb.’  My mother is there with my father.

Postscript: We are saddened to report that Iseko san passed away on 11 August 2021. She was to celebrate her 100 years of life in a few weeks time. Iseko led her life always positive. She will be missed so much. Dr Yuriko Nagata, Nikkei Australia