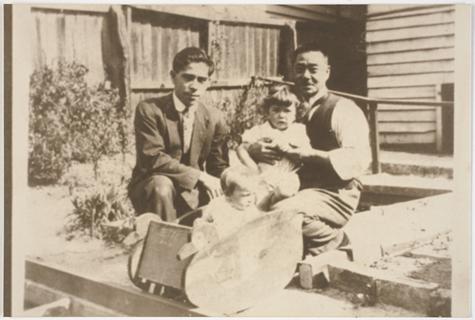 Setsutaro Hasegawa (right) with his son Leo and grandson Leonard. Setsutaro was interned at the outbreak of the War in the Pacific, as were most people of Japanese heritage. These and other Nikkei Australian histories will be explored in PWFC. (photo supplied by Andrew Hasegawa)

Nikkei Australia is a partner in a major international collaborative project exploring global Nikkei histories. Called Past Wrongs, Future Choices (PWFC), this $7.5 million project involves a team of 80 researchers, teachers, archivists, librarians and museum curators on five continents, and connects 40 partnering institutions such as universities and museums in Canada, Brazil, Australia, Japan, and the United States. Eight members of Nikkei Australia are part of the PWFC team, and our group is one of the few community organisations to be a partner.

PWFC is an ambitious seven year project, and is the first ever to connect the histories of the mid-twentieth century internment, dispossession, and displacement of people of Japanese descent in allied countries through the Americas and the Pacific. The project is hosted by the Centre for Asia Pacific Initiatives and Centre for Global Studies at the University of Victoria in Canada, and is made possible through substantial ($2.8 million) funding from the Canadian government, announced in mid June 2022.

Based on Nikkei historical documents and stories, the PWFC project will develop four coordinated, multinational museum exhibitions, a digital archive and educational resources as well as three books and a four-part documentary series. The goal is to inspire societies where racialised injustice continues to confront the lessons of history and examine the question of what we owe one another, especially in times of crisis. In Australia, Nikkei Australia will work closely with a PhD candidate in Curatorial Studies (Monash University) to develop a major exhibition featuring ideas and themes in Nikkei Australian histories. While this project looks back into the past, the focus is on the future.