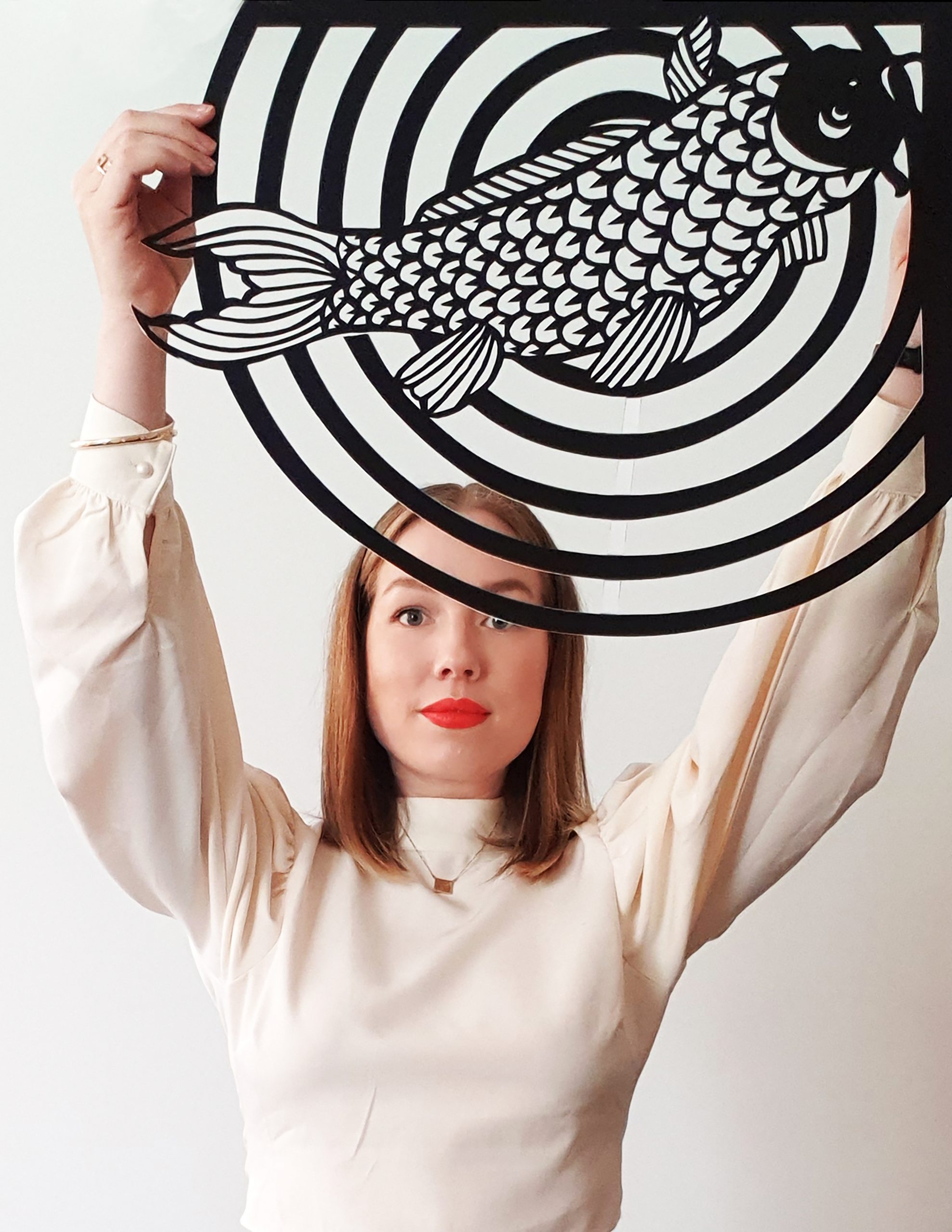 Nikkei Australia member, Elysha Rei has been awarded an Artist in Residence Fellowship 2022-23 in the the Past Wrongs, Future Choices project.

Elysha is a Japanese Australian based in Meanjin (Brisbane), who explores narratives of cultural identity, site-specific history and environmental elements through paper cutting and public art. Drawing also upon her family history, Rei proposes to intertwine the histories of Japanese Australians and Canadians in a piece exploring the transcultural and ambivalent identities of Nikkei in the post-war era. Elysha takes up her residency early in 2023.

‘After deporting almost all civilians of Japanese origin in Australia at the end of WWII, just eight years later my Japanese grandmother was one of 650 Japanese ‘war brides’ who sailed across the Pacific to start a new life in Australia with my Australian grandfather. At the time of preparing to migrate to post-war Australia, Japanese Australians who were interned during the war were deported back to Japan and Japanese Canadians were released from internment into a life that was void of their homes, businesses and belongings that had been sold by the Canadian government. Despite these wrongs against Japanese civilians at the time, my grandmother made a choice to travel in the opposite direction – towards Australia to join my grandfather – and ultimately create a lineage of Nikkei Australians that is now my mother’s side of the family.

As a third generation Nikkei Australian, my creative practice-led research aims to navigate this transcultural identity that is imbued with the ambivalence of pride in Japanese cultural heritage, intergenerational remnants of pain from racial discrimination, and the experience of inhabiting a third space where ‘the negotiation of incommensurable differences creates a tension peculiar to borderline existences’ (Bhaba 1994: 218).

It is the interstices of these ambivalent experiences and historical narratives centred around past wrongs and future choices, that I wish to investigate and translate into forms of paper cutting. The art of paper cutting creates visual narratives using the spaces cut from a substrate, allowing positive and negative space to be utilised both in metaphor and materiality.

Using archival records as a starting point for evidential inquiry into the displacement of Japanese diaspora in Canada and Australia, I wish to create work that intertwines the experiences of Nikkei within both countries and connects the narrative between past wrongs and future choices of these parallel histories. Records will be used as point of visual stimulus, translating decisions and actions in documents, as well as photographic references, as visual research for creating an installation or series or hand-cut paper works.

This installation and/or series of hand cut paper works can culminate into an exhibition titled Kiri-e Nikkei: The interstices of diasporic displacement.’

Elysha Rei – ​​b.1986 Saudi Arabia | Lives and works Meanjin (Brisbane), Australia
​
Elysha Rei (pronounced eh-lee-sha ray) is a Japanese-Australian artist that explores narratives of cultural identity, site-specific history and environmental elements through paper cutting and public art. She has a Bachelor of Visual Arts from USQ (2008), a Master’s in Business Administration (2018) and is currently undertaking a PhD exploring how Nikkei Australian artists navigate their identity through creative arts practice. Rei has created and exhibited work, curated exhibitions and managed cultural spaces across Australia, Japan, New Zealand, Netherlands, Thailand, and the US. She founded the international artist residency program, Sam Rit Residency in rural Thailand in 2014, and co-founded the Artist-Run-Initiative Made Creative Space Toowoomba from 2011-2013. She has been an invited artist in residence for Museum of Brisbane, Artspace Mackay, and Barcaldine Arts Council. In 2018 was the recipient of an Asialink Arts Creative Exchange in Japan. She has public artworks in Brisbane, Toowoomba and Warwick, and artworks in the collection of the Westin Brisbane, Brisbane City Council, Warwick Regional Council, Toowoomba Regional Art Gallery, QIC and the University of Southern Queensland.​

Elysha will be taking residency at the Centre for Global Studies and the Centre for Asia Pacific Initiatives at the University of Victoria, along with Rachel Kiyo Iwaasa, a Vancouver-based pianist.