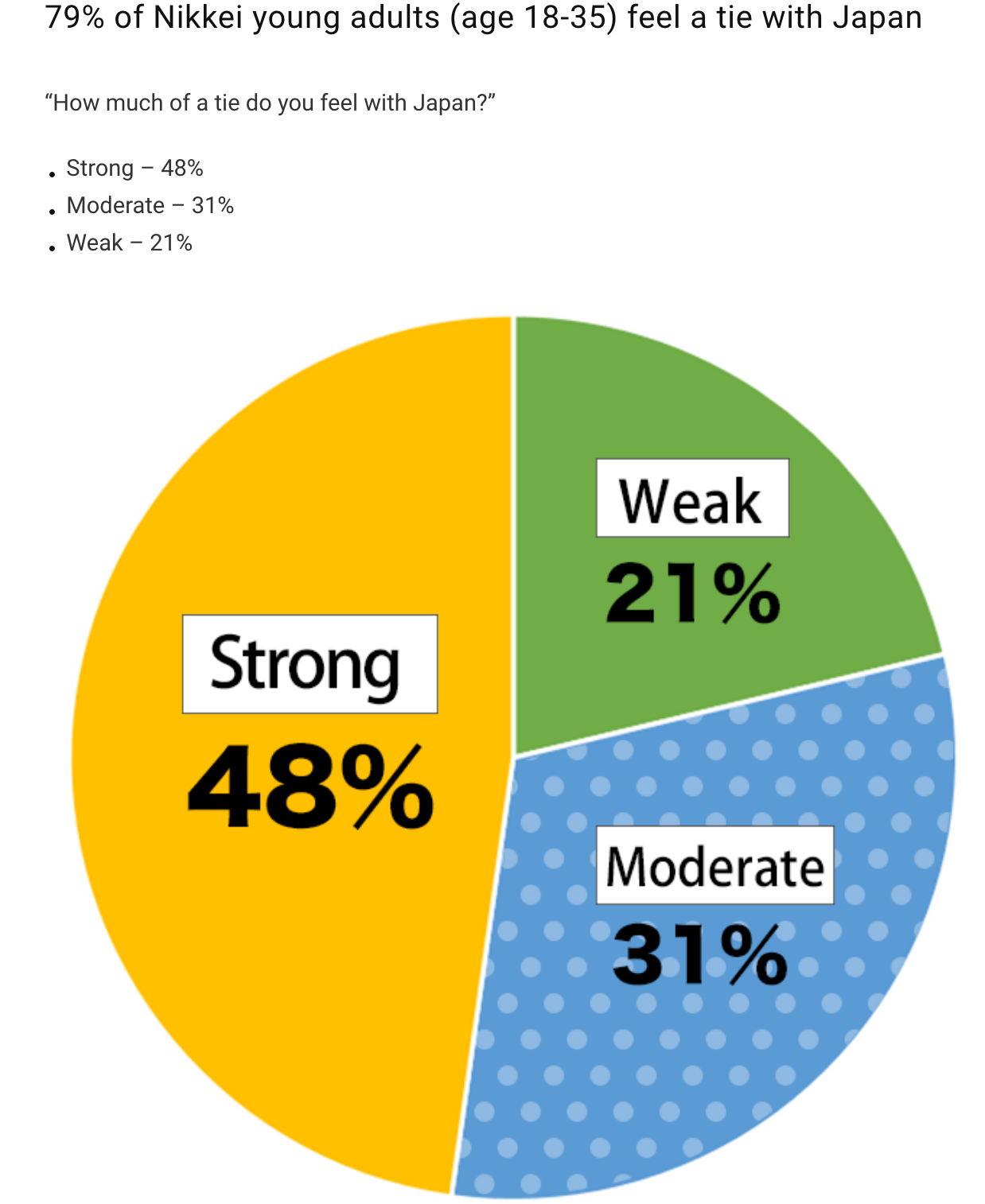 On 31 August 2020, The Nippon Foundation announced the results of its Global Nikkei Young Adult Identity Project. Jointly facilitated by the Japanese American National Museum, it is the first large-scale study to look at what it means to be Nikkei. The project’s aim was to glean a holistic understanding of the Japanese diaspora across the world.

The study was launched in response to concerns that young Nikkei are losing their sense of identity and are less likely to be active in Nikkei organisations. Using data from approximately 3,800 online survey respondents and 12 focus groups held across the world (mainland America, Hawaii, Canada, Brazil, Peru, Argentina, Paraguay, England, the Netherlands, the Philippines, Australia, and Japan) the study found that, contrary to expectations, Nikkei young adults (aged 18–35) continue to have a sense of connection to their Nikkei identity, are interested in being connected to Nikkei from other countries, and feel connected to Japan (though less so among Australian Nikkei; see below).

Some of the most striking findings include:

For the purposes of the study, the term ‘Nikkei’ was defined as ‘Japanese emigrants and their descendants throughout the world’. However, responses highlighted the complexity of the term and its varying significance. In Australia and Europe, Nikkei is not commonly used. In the United States, Nikkei emphasises a shared experience and community, although the term ‘Japanese American’ is more common. The term Nikkei is most prevalent in Latin America, and is associated with cultural pride. Nikkei is the person who can find the balance between the two worlds,’ said one respondent in Brazil.

Australian Nikkei stand out among others in the diaspora on numerous counts (although this may be due to the smaller sample size):

Japanese Australians expressed pride in the culture inherited from their parents. They also emphasised it is important ‘to understand… the language’ and the ‘ability to speak it fluently’. At the same time, participants were critical of Japanese culture, stating, ‘I can also see its faults… I also have an outsider’s perspective on many Japanese issues’. Another young adult commented, ‘I have a love-hate relationship with my Japanese ancestry. I will always love Japan but some of the more conservative and closed-minded values that a lot of Japanese people hold makes me angry’.

A second theme that emerged is the contrast and balance of two cultures. One said having two different cultural backgrounds is an advantage and ‘something to be proud of’ that ‘has allowed me to become a flexible individual and has also given me the opportunity to learn from the experiences of my ancestors in both east and western culture. Best of both worlds, really.’

The idea of multiculturalism permeates the Australian national narrative, where mixed races and multiple identities and cultures exist and are acknowledged in tandem with the Australian national identity. While in Latin America, being Nikkei overwhelmingly is viewed as unique and positive, for some Japanese Australians, it is just ‘normal’ since ‘everyone has ancestry and it’s interesting to learn about the history of your own people (and of others too since Australia is a multi-ethnic country).’ One young adult remarked that ‘living in Australia, everyone is considered Australian—and some also choose to equally identify with their country of ancestry. To me, being Japanese is my identity, as is Australian—rather than just Nikkei.’

A third theme was a connection/lack of connection to Japan and/or to the community. As many of the participants are children of more recent immigrants, the Nikkei community is not as well established as, say, in the Americas. Only 17% of Australian Nikkei young adults felt a strong connection to Japan, compared to 46% in the US and 53% in Latin America and Asia. However, there is a desire to build and strengthen Nikkei communities in Australia. One respondent reflected, ‘I have the heritage but no culture and no understanding of Nikkei. I would be interested to be invited to join a group and have a sense of place within this community.’

Some Japanese Australians’ identities are linked to Japan through citizenship (or lack thereof). One person commented, ‘I was very upset when I had to give up my Japanese passport due to dual citizenship restrictions in Japan. I felt I lost a part of my Japanese identity.’ Another stated, ‘as Japan does not allow dual citizenship, I have held a permanent residency in another country for majority of my life. I have struggled with my Japanese identity growing up in the ’90s where assimilation was my biggest objective during a time of heightened racism. Whenever I go back to Japan, I feel that I face a different sort of racism, as though I am judged for not being ‘Japanese’ since I struggled to learn the language or understand the customs since I spent majority of my childhood abroad.’

The study concluded that the creation of a diverse global Nikkei network is paramount to the continual construction and renegotiation of identity. The Nippon Foundation (which has been working closely with Nikkei communities in the Americas and Asia for more than 50 years) aims to use the research to strengthen ties between Japan and Nikkei around the world, and to construct an online platform to create a global Nikkei community.

For more information and to read the full report, see: