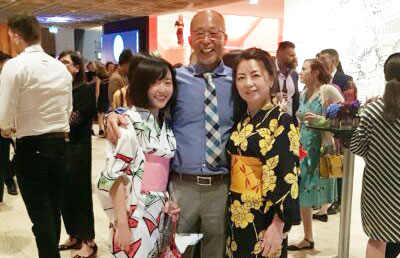 My parents met in Osaka when Mum was in her final year of school and Dad was a university student. Mum was an occasional backup singer on TV and graduated with a degree in nihongo (Japanese), while Dad worked as a sales representative for a kimono dress and fabric company.

They married in their twenties and enjoyed their life together for nearly a decade before I was born in 1987. With a baby on the way, Dad secured a job at a major Japanese real estate firm. He became the quintessential Japanese salaryman, leaving home before sunrise and returning late in the evening after Mum and I had fallen asleep. He longed to spend more time with us, but could only do that if he accrued overtime and worked on public holidays. The gruelling schedule eroded his physical and mental health. He was eventually hospitalised, unable to move from extreme fatigue and severe abdominal pain. His company encouraged him to take a year-long leave of absence.

My parents embraced the opportunity to pursue their dream of living abroad. Sydney was at the top of their list. Every year since I was born, my parents had used their ten days of annual leave over the new year period to visit Sydney. Dad has an infinite love of the ocean. His father managed a port in south Osaka, and Dad was an avid surfer in his youth, chasing waves along the Wakayama and Shikoku coasts, going on surfing trips with his mates and dropping into quaint towns. Mum’s brother had recommended Sydney as a destination, knowing how much my parents appreciated beaches and nature. On their first visit, they fell in love with the laidback lifestyle. It seemed an ideal place to get away and recalibrate. Serendipitously, Dad was offered a job by a family friend who exported Australian opals to Japan. Dad was asked to help expand the business, and he enthusiastically agreed.

Another reason my parents wanted to move to Australia was because they were concerned about the education system in Japan. They had witnessed their friends’ children spending their after-school hours doing rote learning at cram school. They thought the Japanese education system didn’t teach children the lateral thinking skills required to work overseas and become a global citizen.

I was four years old when we moved in 1991. Sydney was a world away from Osaka, where most of our extended family lived. We settled just north of the Sydney Harbour Bridge. None of us could speak English. Despite this, my parents sent me to a local Australian preschool part-time to gauge whether I could adjust to a new learning environment. On alternate days I attended a Japanese preschool. To my parents’ surprise, within a few months I expressed a preference for the Australian preschool, which nurtured freedom of creative expression and fostered independent thinking. Largely because of this, our gap year in Australia turned into 17 years.

I only spoke Japanese at home and Mum attempted to teach me nihongo with second-hand textbooks her friends gave us when we visited Japan. But I was adamant about improving my English, so nihongo classes were replaced by English tutoring. This meant my Japanese reading and writing skills stalled at a primary school level.

I had limited contact with other Japanese people in Sydney growing up. At primary school, I was one of only two Japanese students in my year, although the school was otherwise culturally diverse. At the time, my desire to be more like my Caucasian friends took precedence over my Japanese heritage. Perhaps, on a subconscious level, I felt that assimilation was the only way I’d be accepted, especially with the rise of anti-Asian rhetoric in politics and society during the ’90s.

Mum sometimes packed cute bento boxes with yakisoba or soboro don. I would run to a corner of the playground and scoff down my lunch, then bolt back to wherever my friends were playing. Afterwards, I’d plead with Mum to pack me a peanut butter sandwich. We laugh about this now. I hear that these days school canteens in Australia sell sushi and many other foods from different cultures, a far cry from the meat pies, sausage rolls and sandwiches in my day.

My only connection to Japan was through my parents and my maternal grandmother, who we visited on annual trips to Japan. Obāchan (grandma) often sent me handwritten letters on Sanrio paper featuring Hello Kitty and Kero Kero Keroppi characters. She used hiragana or simple kanji characters, as she didn’t want me to feel ashamed or embarrassed about my Japanese. Rereading the letters now, I wonder how Obāchan must have felt with her daughter, son and only grandchild all living abroad. She never seemed lonely, although she must have felt that way. Even when I cried in her arms when it came time to leave, she was full of warmth and positivity. She was a loving and supportive presence in our lives, even from afar. So when Obāchan’s health started deteriorating due to dementia, Mum and Dad made the difficult decision to pack up their lives in Sydney and move back to Japan to look after her in 2008. They took our beloved dog, Oscar – a Jack Russell-Fox Terrier cross – who’d joined our family a few years after we’d moved to Sydney.

My parents encouraged me to move to Japan with them. So, at the age of 21, I found work as an English-language teacher and taught at 12 different elementary schools in Sanda City, Hyogo Prefecture. It wasn’t easy for my employer to find me teaching contracts. Numerous schools were reluctant to hire someone with a Japanese nationality to teach English. Despite showing proof that I was raised in Australia, they questioned my English abilities and implied they would prefer a gaijin (foreigner) for the role. The discrimination I faced due to my bicultural upbringing greatly affected me and made me long for Australia. After two years in Japan, I decided to return to Sydney to pursue a career in the arts and cultural sector, an industry I was always passionate about, with 15 years of experience in dance and the performing arts.

In October 2019, my parents made a special visit to Sydney to attend the opening of Japan Supernatural at the Art Gallery of NSW, an exhibition I’d worked on throughout 2019 as assistant curator. Mum and I wore yukata made by Obāchan for Mum decades earlier. My parents beamed with pride.

Oscar passed away a few months before their visit. He lived to the ripe old age of 20 years and 8 months, unofficially placing him in the top 20 oldest living dogs! Like everyone in our immediate family, Oscar was bicultural, having spent the first 12 years of his life in Sydney, Australia, then his final years under my parents’ care in Hyogo Prefecture, Japan. When we mourned his death, we also mourned the life we had shared as a migrant family in Australia.

My parents held a Buddhist ceremony for Oscar in Japan before his body was cremated. I was stunned at the level of care that went into his final sendoff. The ceremony helped to affirm how much we respected him as an integral member of the family.

My parents brought the urn with Oscar’s ashes to Sydney on their brief trip, as they thought he should be laid to rest where he was born. Over several days, we drove to the different parks and beaches that we used to visit with Oscar, and pulled up in front of the houses where we had lived, reminiscing and sharing stories about that time.

I have always appreciated the respect for the deceased that’s practised in Japanese culture. Whenever I go back to Japan, I visit the cemeteries where my ancestors rest. My favorite place is Isshinji temple in Osaka, known for its Buddha statues made from the remains of deceased, a custom going back centuries. That is where Obāchan now rests, alongside her family and friends. Isshinji is usually crowded with visitors, and our family is grateful that she is seen, cared for and prayed to every day.

I have often questioned whether I would choose to be buried with my family and ancestors in Japan, or whether Australia would be my final resting place. It raises conflicting feelings I have about my heritage and my Japanese-Australian identity. What does it mean to be a migrant in this country when the history of this place is still evolving? A fellow Japanese Australian artist, friend, and one of Nikkei Australia’s founding members Mayu Kanamori teaches me a Japanese concept: Hone o uzumeru kakugo. It translates to ‘the preparedness and determination to bury one’s bones’, referring to the decision one makes to reside in another place until their death. During these turbulent times, when many people are oceans away from their families, this statement resonates with me more than ever.

Yuki Kawakami is a creative producer based in Sydney who’s interested in socially inclusive community-led projects and supporting career pathway opportunities for young people in the arts. She is currently working as the Tertiary and Youth Programs Producer at the Art Gallery of New South Wales and is the Chair on the Board of Firstdraft. In 2019, she was assistant curator of the Gallery’s major exhibition Japan Supernatural, and creative producer of its Sydney Festival program, Night Parade of One Hundred Goblins. In 2017, she was awarded the Edmund Capon Fellowship to research youth engagement programs in Japan, Singapore, Taiwan and Hong Kong. She is passionate about ethical leadership practices in mentorship and working with artists from culturally and linguistically diverse backgrounds. (Profile photo by Felicity Jenkins, AGNSW)