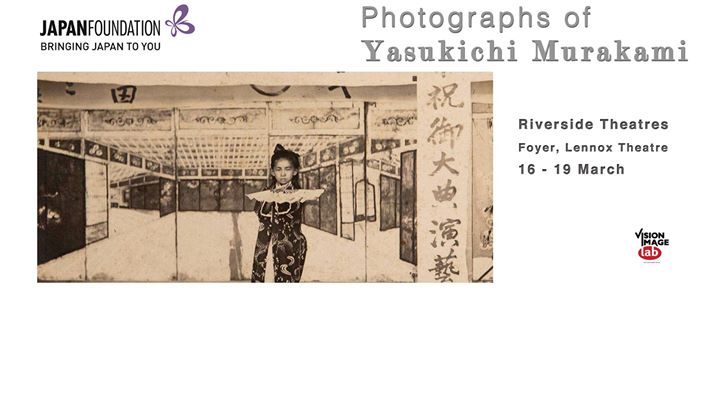 Photographs of Yasukichi Murakami will be exhibited at the foyer of Lennox Theatre at Riverside Theatres 16 – 19 March during the performance season of Yasukichi Murakami – Through a Distant Lens. This exhibition is a free event, made possible by support of Japan Foundation.
http://www.eventsinaustralia.net/event-photographs-of-yasukichi-murakami-parramatta-627664

Yasukichi Murakami (1880-1944) was born on 19 December 1880 in Tanami, Wakayama prefecture, Japan. He joined the flow of younger men from his village to Cossack, Western Australia in 1897. He later moved to Broome and became an entrepreneur, inventor and photographer. He was operating a successful photography studio in Darwin in the 1930’s until the Japanese bombing of Pearl Harbour, when he, along with all of the Japanese in Australia, was interned as an enemy alien. He died whilst in Tatura Internment Camp. As a result, a lifetime’s worth of photographs were lost.
Whilst researching for the theatre production, Yasukichi Murakami – Through a Distant Lens, some of his original photographic prints and printed postcards were found. Some were on mantelpieces in homes of old Broome families; with a researcher in Bunbury; in the Northern Territory Library’s photographic collection, unattributed to him as a photographer; and in his hometown in Japan.
Yasukichi Murakami – Through a Distant Lens’ production team is donating Murakami’s photographs to the State Library of Western Australia, and is honored to be able to contribute to the finding and archiving of a slice of Australian history that had been lost.
This photographic exhibition at Riverside Theatres is the first time Yasukichi Murakami’s work has been exhibited. All photographs are a courtesy of Murakami Family Archives with special thanks to Proffessor Mutsumi Tsuda, Noreen Jones, Northern Territory Library, Broome Historical Museum and Sisters of St John of God, Kimberley Photographic Archives. This cover photo by Yasukichi Murakami is of Jimmy Chi (Senior)’s sister Yoshi Gertrude Chi dancing during Taisho Emperor’s Coronation ceremony celebrations at the Japanese Club, 1915 Broome, WA.
– Mayu Kanamori / Performance 4a