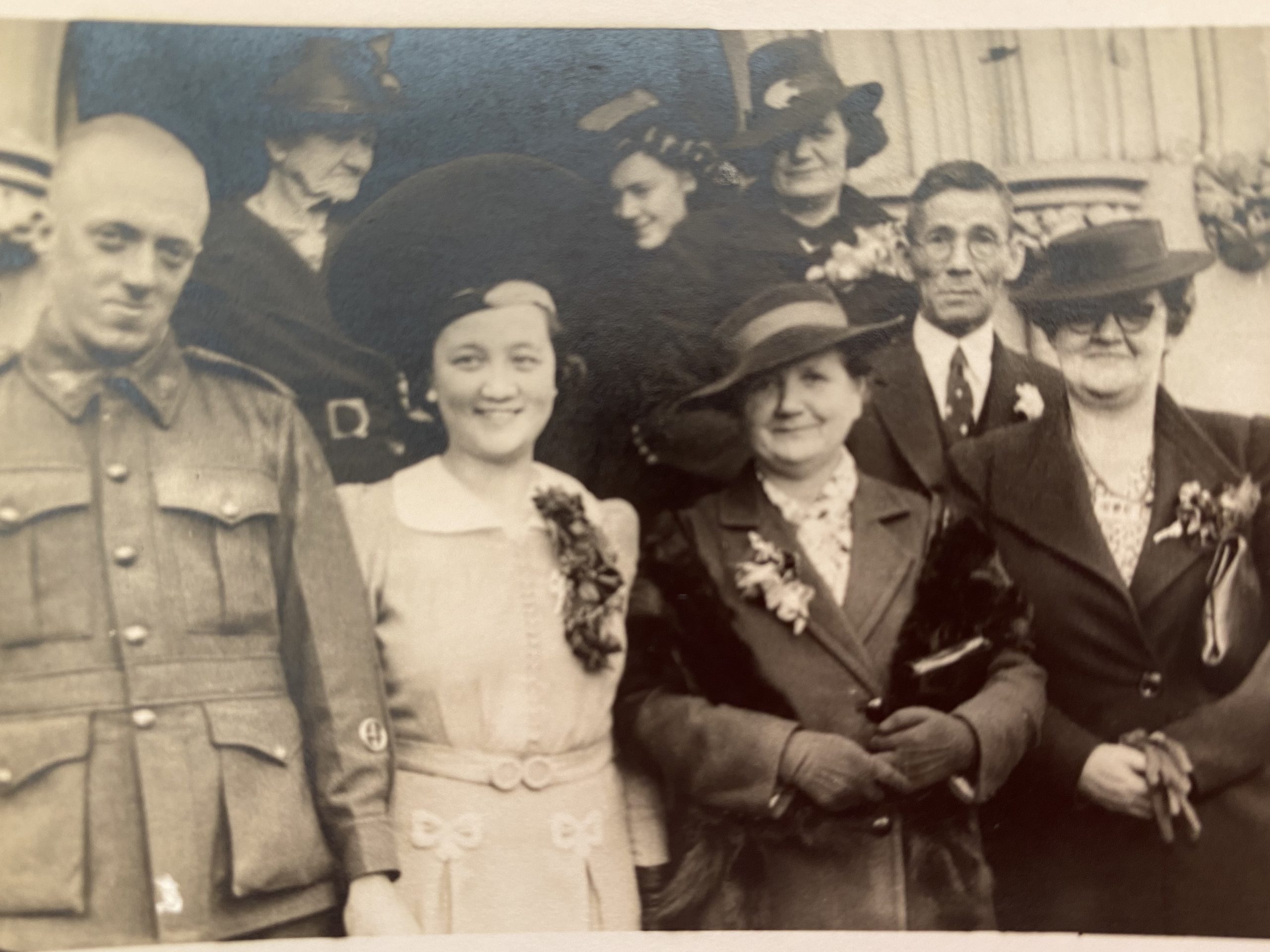 My grandfather Tom (Tomo) was a larrikin; the self confessed black sheep of the family. He liked to ‘stir the pot’ and his deep belly laugh would erupt whenever he sensed some kind of family controversy.

Just for fun, he left his fiancee, my Nan, waiting for him to arrive on their wedding day at St Andrew’s Cathedral in Sydney ‘FOR A LONG TIME’, she says. She wanted to throttle him. He just laughed.

I called him Pop. He was strong-willed, bullish, hard-working, but also very charismatic and well liked. The bullish trait he seemed to have inherited from his Australian mother Annie rather than his Japanese father Shojiro, who he said was a polite, softly spoken man.

Pop and I had three things in common: our interest in our family history, travelling, and blackberry as our favourite flavour of jam!

During my university days, I would regularly visit my grandparents’ modest, family home near Parramatta where my mother and her siblings grew up. We’d chat at the kitchen table sitting on retro, purple swivel chairs while my Nan fussed around.

Pop was very good at telling me the facts. What I desperately wanted to know though were the soft stories – stories of moments, conversations, people. Sometimes I would get a glimpse of this, but rarely.

Before he died, he left me with what I view as the most precious of gifts. His old photos, birth and death certificates, contracts, newspaper clippings, and much more from his years and years of research on our family tree.

So here I am, trying to piece together a Japanese Australian family history starting in Hikata, Wakayama, Japan in 1880, moving to Australia and going full circle right back to where we began, with me, four generations on, an Australian with Japanese ancestry moving to Japan in just a few months.

I know this is why you left all your research to me. You knew I would continue to explore our history and treat all this knowledge with care. So here I go, trying to tell your story as best as I can.

Shojiro Omaye was born in Kainan, Wakayama in 1880. When he was 22 years old, he boarded the Kumano Maru at Yokohama with 76 other Japanese workers bound for Townsville, Australia. He was contracted to the Drysdale Brothers to work on the Pioneer Plantation sugar cane field for four years.

I read that the conditions for the Japanese on the cane fields were quite good. However, this does not explain why my great-grandfather Shojiro absconded from the plantation only a few months in, along with someone called Josaburo.

There was a warrant for their arrests and Shojiro was either fined 3 pounds and 4 shillings or three months imprisonment, I don’t know which punishment he chose, or if he had a choice. However, I do know for comparison, he earned 27 shillings per month on the cane fields.

Maybe Shojiro was quite bullish in his younger days!

I know nothing about Shojiro from 1902 until 1914, where I finally found a record of him working in a laundry on Stanley Street in Brisbane. Maybe this is where he learned everything to do with laundries as he ended up owning two in Sydney by the 1930s, one in Parramatta and one in Homebush.

At some stage he met my great-grandmother, Annie. She was a school teacher and he was apparently the gardener at the school. Shojiro’s father Seyomon was also a gardener as listed on their marriage certificate.

Shojiro and Annie were married in 1918 and they had five children – Aya, Yuki, Kazu, Tomo, and Kiyo. I love that each child was given a Japanese first name, although this would prove difficult for them later on. My grandfather Tomo is the grumpy looking boy at the front of this picture.

I asked Pop many times to tell me about his father Shojiro. He told me his father was a gentleman. He always tipped his hat to the ladies. He worked hard and liked to gamble on the weekends.

Sometimes he cooked Japanese food and Pop said he learnt to wash and cook rice from him. He made a fusion fried rice which became a family tradition and included tinned tuna.

Shojiro didn’t drive. He had tried a few times but after some mishaps he gave it up. His wife Annie drove instead. She even drove an ambulance during the war and in her later years chauffeured a wealthy man across the Nullabor, only to have him die of a heart attack half way. She kept driving with him dead in the car until she reached the next town.

Shojiro returned to Japan only once (that I know of) in 1919 for just a few days. I wonder if he went to visit his mother as his father had already passed away.

My Pop, Tomo, at age 12, decided to get a job instead of changing schools when his family was moving house (typical Tom). Soon he was a ‘Page Boy’ at the Hoyts Century Theatre on George Street in Sydney. This led to a passionate life-long cinema pioneer career with Hoyts.

Pop was very tech savvy considering his lack of formal education. I’m sure he was one of the first people to have a personal video camera back in the day. He even made sure in his later years he had all his reels and cassettes put on DVD so they could live on.

Then Pearl Harbor was attacked on 7 December 1941. John Curtin, the prime minister at the time declared war with Japan the next day and almost all Japanese were rounded up.

Shojiro was taken by police this very day. He was aged 61 and he had lived in Australia for 39 years. His only property listed on the report were a pocket watch (which I have half the chain as an heirloom), 10 shillings, and a razor.

Shojiro’s eldest daughter Aya was also interned at age 24, but not until May 1942. Aya worked as a typist for a Japanese company. The final national security report about her declared she posed no danger despite her ‘very Japanese appearance’. Apparently she stated under interrogation, ‘I was born in Australia, unfortunately, but consider myself Japanese’. The report said she denied making this statement, but it did say she declared the officer was brusque with her and made her angry.

Meanwhile, Shojiro was transferred to the Hay internment camp. His wife Annie continued to run both laundries in his absence.

On 15 May 1942, Shojiro was brought before the Aliens Tribunal. He was asked, can you understand English? He said no. I don’t know why he said no, as Pop said he only spoke English at home.

Shojiro spoke through a translator. They asked if he felt he had been wrongly interned and should be released. He said no. They asked if he understood this was his last chance of leaving before the end of the war. He said, ‘yes I have quite made up my mind, so I am quite prepared to stay here until the war ends.’ He then agreed to have the application for appeal withdrawn.

I read in Nikkei Australia founding member Dr Yuriko Nagata’s book, Unwanted Aliens, that over half the Japanese who had appealed to be released withdrew the applications for fear of public reaction.

Shojiro became very ill in the camp and was transferred a few times to hospital. He was released in June 1943 due to his illness. By now Shojiro was 63 and he died from tuberculosis and myocarditis just seven months later at home with his family in Sydney.

Pop gave me a wooden box that belonged to his father Shojiro. He said Shojiro’s friend made it for him in the internment camp at Hay.

My grandfather Tomo (from now he referred to himself as Tom) at age 18, enlisted in the Australian Army just two weeks prior to his father’s death. His older brother Kazu had already been in the Army for a year.

Pop (Tom) said he had tried to enlist once at the Town Hall but was rejected, possibly because of his race, so he went to another location where he stated he was Maori. He was then allowed to join the Army.

Pop joined the Army’s cinema unit and was given a projectionist set to entertain troops. He took this with him to Papua New Guinea. At one point he had his finger severed in a projection reel and required surgery. This didn’t stop his love for cinema though!

During his time in the Army, Pop was tasked with marching the Japanese back to Hay after the Cowra breakout. I can’t imagine how difficult this could have been for him or if by now he had decided to detach himself from his Japanese identity.

Pop said being in the army was the best thing he ever did. He had so much pride marching on ANZAC Day. He had a strong connection to Australia despite his Japanese roots and identified with being Australian.

I still remember as small children, my brothers and I crowding around the TV waiting to see Pop march down George Street behind the Cinema Unit flag with its large projection screen on it.

I clearly remember each year less and less of Pop’s friends marching with him until one year it was only him. After that, he said he couldn’t walk that far. He had emphysema and got puffed too easily. I told him to ride in the car behind the flag. He said, ‘never’!

Pop and his brother Kaz both returned from the war. However, Kaz died young at only 50 years old from an aneurysm. My mum described Kaz as a wonderful uncle, always happy with a beaming smile.

Pop spent many years travelling all over the world, including Japan. In 1982 he went to Japan to visit a family friend Shu and his wife Mrs Nish. Shu lived ‘out the back’ of Pop’s family home in Burwood in a small cottage. My mum said Shu would teach her Japanese writing when she visited and Mrs Nish always cooked Japanese food. They didn’t speak English and I remember Pop showing me a video he took visiting their home in Japan, waving and smiling happily to each other. I don’t know what brought them to Australia and why they left again.

My Pop, Tom Omaye died in 2018 at 93 years old, and my Nan followed him shortly after. Pop was ready to go, his years of struggling with emphysema exhausted him. This gave us all time to say proper goodbyes, but even with the option of proper goodbyes, it still didn’t prepare me for everything I wished I could ask him. Especially now after my newfound knowledge and understanding of the difficulties he must have faced in his life.