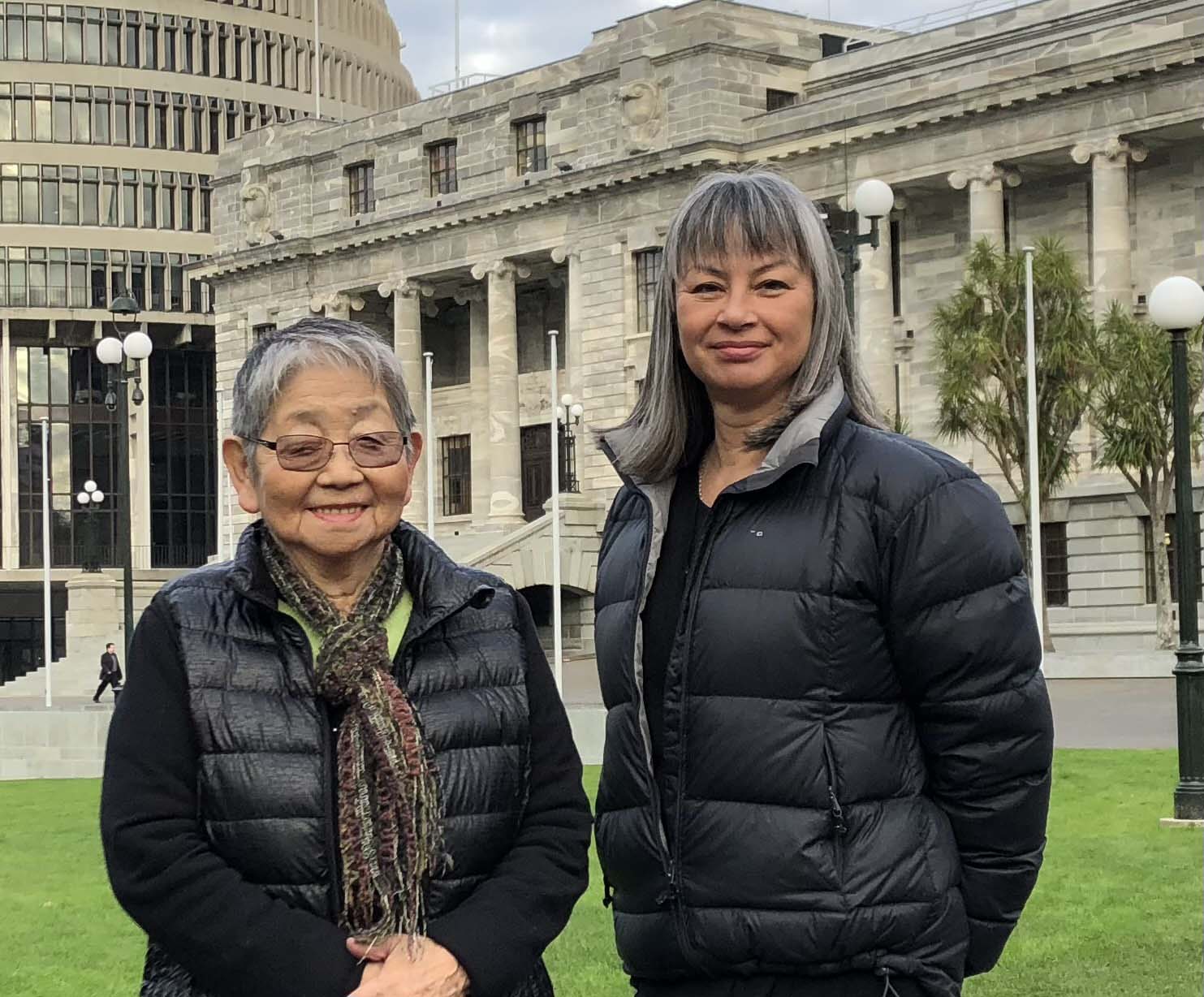 I descend from a long line of samurai families. I am the fifth of six children born to my parents, Taeko Yoshioka and Noel Braid.

My parents met during the Allied Occupation of Japan. Dad was on R and R in Japan during his tour of duty in the Korean War. At 25 years old, he was a gunner in the 16th Field Regiment of the Royal New Zealand Artillery, while my mother, who was 19, worked in a noodle restaurant. They actually met at a beer hall: my dad and his friends went up to my mum and her friends to ask for directions. Both groups stayed in touch. But my mother’s mother was furious. She couldn’t understand why her daughter was trying to make friends with the enemy!

My mother had had a privileged upbringing. Her father was an engineering officer in the Japanese Imperial Navy and her mother was the daughter of a local doctor, both were from highly respected samurai families.

However, my mother’s idyllic childhood was brought to a sudden halt by World War II. Her father died when his destroyer was struck by a torpedo from an American submarine in the Celebes Sea, prompting her mother to pack up her five children and move to a small town where her sisters lived. Two years later, on 6 August 1945, my 13-year-old mother witnessed the atomic bombing of Hiroshima city from her sewing classroom at school. What followed has haunted our family ever since.

My mother and her classmates were quickly mobilised to take emergency supplies into Hiroshima, so they set out on the long walk from their town, towing a laden cart. As they got closer, zombie-like victims of the bombing came walking towards them. When they arrived at what they thought was the train station, it was unrecognisable. My mother left her schoolmates and trekked through the treacherous city to try to locate family members, but had no luck.

She later returned to the city with her mother, only to find one relative who only survived a few more days. Not knowing what she had been touching or breathing in, Mum developed leukaemia many years later. My grandmother died of stomach cancer in 1986. I believe both illnesses were linked to the radioactive substances they encountered in Hiroshima city.

It was not the done thing for a Japanese woman to marry outside her class, let alone a foreigner, but war changes everything. My father visited my mother’s mother and convinced her to allow her only daughter to marry him. After a convoluted military process, my parents finally tied the knot. In 1952, my oldest brother was born.

Eventually, Dad returned to New Zealand to set up life in Hawke’s Bay, and my mother and brother followed him in January 1956. Over the next dozen years, they added to their family, with two more boys, then their first daughter, and finally my younger sister and I coming along several years after the first four.

I was born in 1966, the Year of the Fire Horse, or hinoeuma. Mum always led me to believe that was a good thing, until I found out it wasn’t. I now understand that we’re thought to be ‘husband killers’, which would explain the exceptionally low birth rate in Japan that year. There was no point in having a daughter if you couldn’t marry her off.

My first contact with my mother’s family happened when I was about four, when her youngest brother came to visit us. To this day, I can’t work out in which room he stayed in as we lived in a tiny two-and-a-half-bedroom house. My three brothers were relegated to extra rooms outside as we got older.

Growing up, I was always aware of my Japanese identity. But as I was born in the days when speaking foreign languages was vehemently discouraged in schools (up till the 1960s, children were severely punished for using the Māori language), I was denied learning my mother’s mother tongue. I would use chopsticks and say ‘itadakimasu‘ though, and dress up in kimono for any fancy-dress. There was a half-Japanese boy in my year at school, and we would swap lunches: my cheese and jam sandwiches for his obent­­o. I always wanted obento for lunch but by the time I came along, Mum was used to making sandwiches, and not always with the fillings I liked.

(Photo: Five-year-old Jacqueline in a kimono for a school dress-up day.)

Mum’s first trip back to Japan was at the end of 1978, 22 years after she had left to be with my dad in New Zealand. My younger sister and I went too because we travelled on a child’s fare. I was so unbelievably excited because I’d never been on a big plane before, let alone gone overseas. I am certain that my life has ended up the way it has because of that trip I took when I was 12 years old. We travelled on a shinkansen to Hiroshima and met my mother’s brothers and their families, and spent valuable time with my Obāchan. I was so completely dazzled by everything I saw and everything we did and ate.

On my return, I started learning languages. I started with French then moved on to German, but I really wanted to learn Japanese. I petitioned my high school, reasoning that mum had been a Japanese teacher and could support my studies via correspondence school, but that was flatly rejected. However, I was really determined, so when I went off to university, I announced to the world that I was going to study Japanese. What I didn’t count on was how hard it was.

I felt absolute shame that I couldn’t speak, read, or write Japanese, and struggled with learning the script, making sense of the grammar, and not being as good as some of the other students. I sent letters home to Mum, trying out my newly gained skills, only to have them returned to me with her corrections marked in red pen. I applied for holiday work in Japan, only to be rejected for looking ‘too Japanese’. I think they were being kind about my poor language skills as I was so hesitant to speak, but it still hurt. I drifted and finally dropped out of my degree.

In 1992, I met my former husband at a party in Auckland. After a whirlwind romance, during which he was offered a place in the JET Programme (the Japan Exchange and Teaching program), we married and headed to Hiroshima. My grandmother had died many years earlier, so this time I got to know the rest of my mother’s family really well. Her youngest brother, whom I’d first met when I was four, gave us the most amazing experiences, and I learned so much. I decided to re-enrol in my degree and chipped away at my language papers, but this time I had a purpose and a context to my learning. I took up shodō (calligraphy), which greatly improved my kanji knowledge. In 1995, my daughter was born. As a response to not having a Japanese middle name myself, I gave her one.

Eight months after her birth, we returned to live in Dunedin, New Zealand, where I took a job at the University of Otago. I also became involved in the local sister-city group, which eventually led us back to Japan to live, this time in Hokkaidō. My son was born there, during a blizzard.

My language really came along, and I completed my long-overdue degree in Japanese. It was very hard work, with a lot of tears and frustration, but I had become the first child in my family to be able to fluently speak, read and write Japanese, and to have lived in Japan. In fact, in my wider circle of Japanese family connections, I think I am the only one to have achieved this. I feel sad that no one else in my family has had this experience and been able to pick up the knowledge and skills to maintain the link with our Japanese family. I decided to retrain as a secondary school teacher, and I taught Japanese and eventually became the president of the New Zealand Association of Japanese Language Teachers. This was a good way to close the circle of disappointment that lingered from my high school days.

These days I live with my 90-year-old mother, supporting her so she can remain living at home. We talk a lot about her life – my head is filled with the stories and experiences she has shared with me. I feel quite privileged to have been born into my family.

A Gen-Xer, Jacqueline Yoshioka-Braid was born and raised in Aotearoa (New Zealand) to a Japanese mother and a Kiwi father. In her twenties and thirties, she spent a number of years living and working in Japan where she discovered not only the roots of her Japanese family, but also the language and culture of her mother. These days, Jacky lives in Hawke’s Bay with her 90-year-old mother, works as an education facilitator for Massey University and dabbles in photography in her spare time.