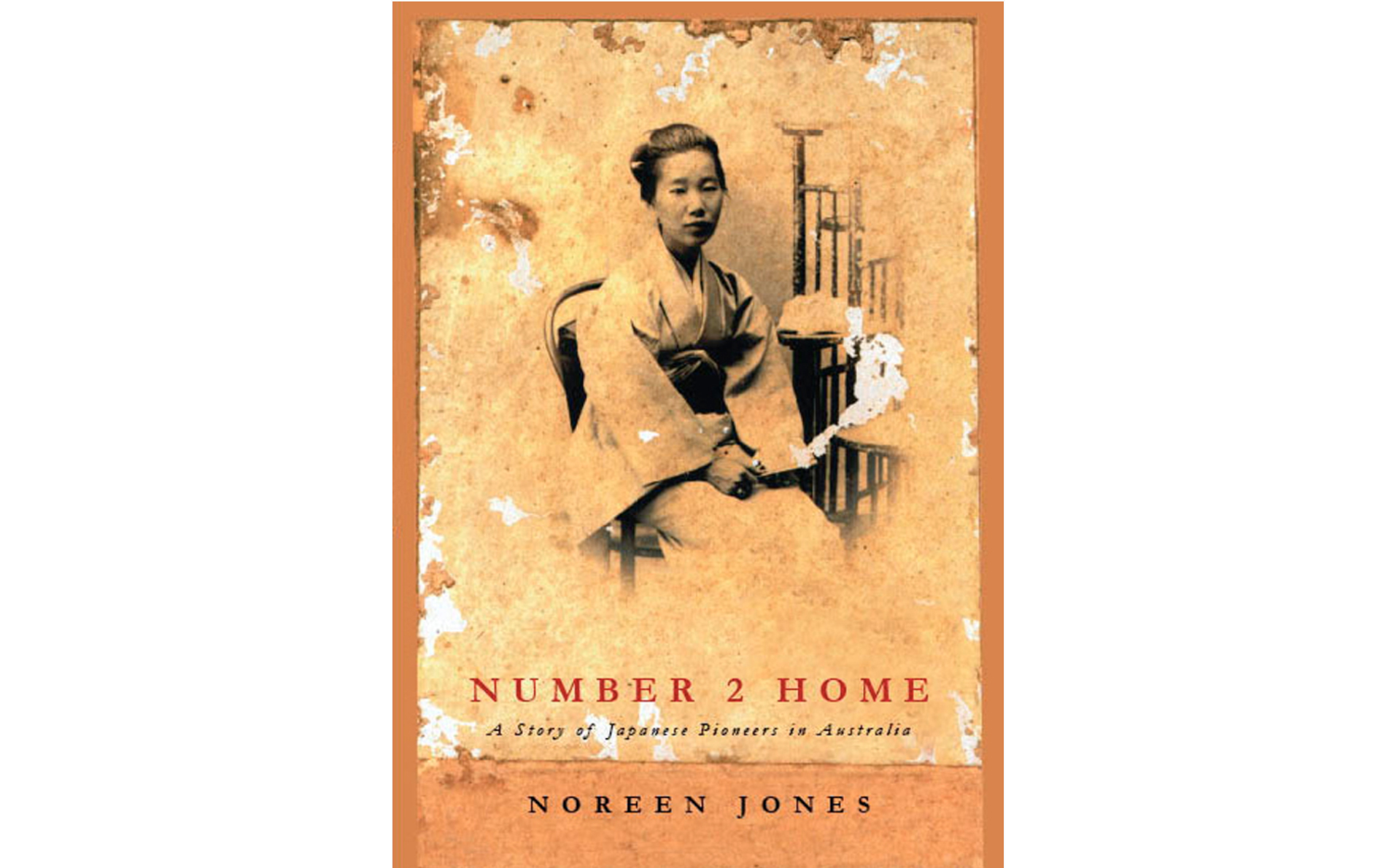 I first met Noreen in 2002 when I launched her book, No. 2 Home: A Story of Japanese Pioneers In Australia. Unfortunately, I did not get to spend much time with her until a few years before I retired in 2013.

After that, Noreen and I became firm friends. I moved to Fremantle but we often phoned each other and I occasionally stayed with her at her home in Australind. Noreen was a very welcoming host. We had a shared interest in Japanese art, aesthetics and ideas. She told me that she and Arthur, her husband, had visited Japan 13 times after they retired.

A little later we made daily contact through an online scrabble game. If either of us had not made a move for a few days we would ring to check that all was ok. Noreen played scrabble with me until the day she died.

That was Noreen, always concerned about others and always wanting to engage.  She had an unquenchable thirst for knowledge. We had long conversations about books, art, exhibitions, travels and so on. There was always more to know. In fact, on one of my last visits to Noreen, I described an orchid I had recently seen on a bush walk. She whipped out her iPad and did not rest until she had identified it.

A few months before Noreen died, I started sending her some haiku I had written. Thus began our new shared interest in haiku. Noreen and I exchanged books on haiku. She told me that she had wanted to preface each chapter of No. 2 Home with a haiku, but copyright was too expensive.

This is the last haiku I sent to Noreen:

a home among trees

It refers to her welcoming home, the rich life she cultivated, and her love of the ocean.

In her last days, Noreen taught herself Japanese calligraphy through YouTube. She explored various kanji but finally settled on Enso, which encompassed the spirit inside, as well as the ongoing wonder of life with all its possibilities of openness and inquiry. Despite her frailty, she made me a card.

Here it is below: a lasting memory of a loving friend who became, for me, a guiding spirit.

I never met Noreen in person, but we communicated by email because our research areas were closely related. She was always polite and generous. Noreen was determined to destroy the clichéd images about Japanese in Australia. In her book, Number 2 Home, she wrote: ‘The Japanese who migrated to Australia before 1901 were not only the prostitutes, pimps and pearlers of popular fiction.’ By telling the real stories of families, farmers, fishermen, entrepreneurs, and itinerants who settled in Western Australia, she showed they were also ordinary people.

She will be greatly missed.

I only met Noreen twice in Canberra when she visited here although we exchanged numerous email messages over decades.  The first time was after her first book, Number 2 Home, came out.  The Japanese Embassy organized a lecture by her and I was asked to introduce her.  The second time was when she visited Canberra with her daughter, Gail, and we met at the National Gallery for lunch.  She was always warm and eager to listen.  I could see how she managed to form trusting relationships with descendants of the Japanese residents in Broome, in spite of the language barrier.  Her warmth came through with her smiles and her sincerity towards research subjects was clear.

Noreen was very generous in sharing her research material with others, including present residents in Broome and other researchers.  We discussed the possibility of establishing a research archive on the Japanese in Australia, by putting together photographs, interview tapes and other related materials each of us had collected.  Unfortunately, it has not yet materialized.

Noreen was somebody who pursued her research interest steadily and carried it out meticulously.  She wrote about people in the past, but readers are able to sense their presence on the pages of her books.  Those of us who follow her steps are trying to continue our historical research and to explore stories which might have been hidden or forgotten, because we all believe, as Noreen did, that they are relevant for the present-day Australians and Japanese.

When I was searching for photographs taken by Japanese Australian photographer Yasukichi Murakami (1880-1944) for a play Yasukichi Murakami Through A Distant Lens (2014), my then collaborator Dr Lorna Kaino gave me a photocopy of Noreen Jones’ Collection of the Mise and Yamamoto Collections. They were mostly photographs but included postcards and some documents which belonged to the Mise and Yamamoto families, who once ran businesses, and made their home in Broome. The earliest dated photograph was1902, and the latest,1925.

They were donated by Tamae Mise and Noriko Yamamoto in Japan, and with help from the Edith Cowan University, Noreen had them scanned, digitised, and compiled. Many were studio portraits, mother with son, couples, men, sometimes in western suits and the women in long dresses, and others in Japanese kimono. Men in white suits standing on the veranda of the Yamamoto store or in front of wooden homes with corrugated iron cladding, pearl divers and crew on their lugger, and amongst it, a Japanese edition of the Goshu Imin Seigen Hou or the Immigration Restriction Act of 1901.

These photographs and documents illustrate Noreen’s Number 2 Home: A Story of Japanese Pioneers in Australia (Fremantle Arts Centre Press, 2002), a canonical book, which helps us to understand the lesser-known history of the early Japanese in Australia. The introduction begins with Noreen in Sandstone, a small country town in the East Murchison goldfield in Western Australia. She was at the town’s celebration of its centenary as a goldmining town. At an exhibition there, she saw a photograph of a headstone with a caption: ‘Grave of a Japanese at Sandstone.’ When translated by a woman she met, Harumi, a Japanese visitor to the festivities, she found that it belonged to a woman. The Japanese writing read: ‘Haru Shimamoto 1907, thirty-six years old.’ In search of who Haru was, and why this Japanese woman was buried in this remote region of Western Australia, Noreen uncovered numerous records, photographs and oral histories, which lead us to understand the lives of thousands of other Japanese people who lived in Western Australia before World War II.

Number 2 Home is a gift to all of us in Australia with Japanese heritage. The violence of war and our desperate attempts to forget its trauma, have wiped out the memory of the early Japanese settlers in Australia. It is as if our wish for reconciliation and healing, along with powerful forces of prosperous trade and strategic geo-political alliances of late, necessitates our collective story-making between Japanese and Australian peoples to begin after the war. Yet for those with Japanese heritage, the memories of the Japanese bombing raids and the treatment of Australian prisoners of war are still present, as these events and stories continue to be commemorated around the country. Noreen Jones’ Collection of the Mise and Yamamoto Collections and Number 2 Home are part of a slim canon made available to us to remember the Japanese pioneers in Australia; that they were our senpai – a predecessor of the same guild or school, a member who offers assistance, friendship, and counsel. It reminds us that we are kohai – a newer or inexperienced member of the same guild or school, ready to demonstrate gratitude, respect, and occasionally personal loyalty towards our senpai.

Having found some photographs taken by Yasukichi Murakami and his partner Eki Nishioka in Noreen Jones’ Collection of Mise and Yamamoto family photographs, and having sought counsel about her research and practices, and about mine since meeting Noreen in her son’s home in Broome, I understand that Noreen is my senpai. With her passing, I wish I had spent more time with her, asked her more questions to learn, and demonstrated more gratitude and respect. As I write this in memory of Noreen, I am grateful for her legacy.