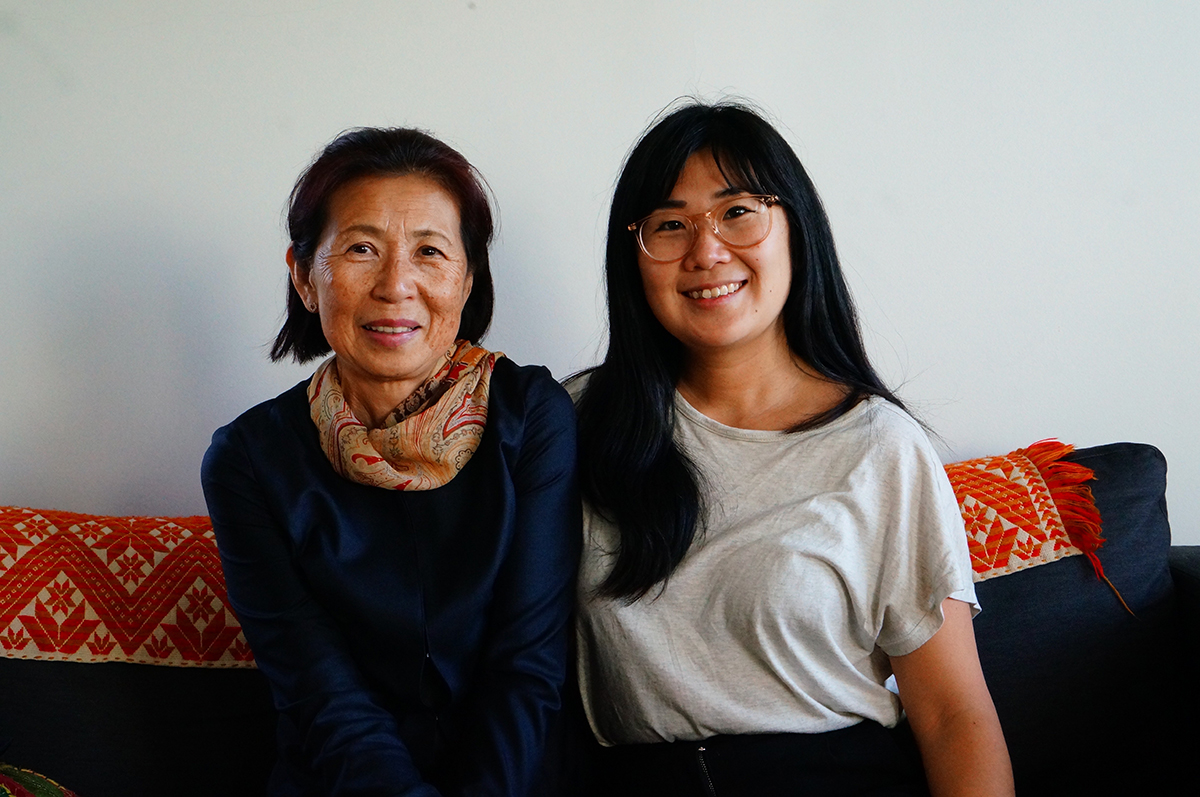 My mother Yumiko, and my father Masakazu, met in Sydney in the early 1980s. My dad had dreams of trying something different, separate from his large family in Nagoya. My mother had previously moved to Australia from Tokyo, with her first husband, a clever man named John from Newcastle who rode a motorcycle. She said that when they were together she sometimes wore a leather motorcycle suit, a red one, but insists now that it wasn’t ‘sexy’. One of the gifts from her first marriage was an old Australian Women’s Weekly cookbook. Discovering this cookbook when I was around 12, I marvelled at the ‘multicultural’ section at the back of the book containing recipes for Spaghetti Bolognese and Fried Rice. The fried rice recipe, I recalled, looked horrible.

Birthplace was significant in our family. Born in Sydney in 1985, I inherited my mother’s surname: Kanai. My brother, Jo, born when we moved to Queensland a little later, had to take my father’s surname. Growing up, we were thus divided by different surnames; but apart from the fact that my dad was often politely addressed as ‘Mr Kanai’, this caused no issues. People always seem to think it’s the most important thing to have a family united by name, but honestly, you still know your sibling is your sibling, and your parents are your parents.

I had a much better understanding of Japanese when I was small. But even then, I found it difficult to respond in Japanese. I wonder if this was because of a childish willfulness to refuse to answer my father directly, who most often spoke in Japanese. Or perhaps I recognised subconsciously, early on, that English was a language of power. It was this kind of tension that marked my early life and, I think, my recognition of these kinds of everyday power struggles and relations now.

It is funny being ‘Japanese’. I often wondered what it meant to have ‘a culture’; and how one was able to differentiate one’s parents’ styles, turns of phrase, and mannerisms, from something that they just did, and something that was truly ‘Japanese’. We didn’t have enough Japanese friends for me to know what it was like to have a ‘community’. Often you can only know what something is by distinguishing from what it is not. For someone who only ever had indirect access to Japan, to know what it is to be Japanese is often to pick up on signals in the way you are addressed. You are Asian, but you are not Chinese; you are from a place that has ‘amazing skiing’; you are from a place whose culture is notionally, held to have value – ‘I love Japanese food!’

If my upbringing didn’t really furnish me with an ‘authentic’ sense of what being Japanese was meant to be, it taught me that belonging is contingent, and subject to the kinds of cultural capital you can perform. Renowned Black feminist theorist, Patricia Hill Collins, notes that racist oppression targets your group identity. I think for this reason my instincts, like many others, have often been to strive for recognition as an individual to escape the bind of racism, even as I have consciously identified this as a self-defeating and politically void strategy for some time.

This is tricky because it is still possible to mobilise your ethnicity as a strategy for individual recognition, especially if your heritage is linked to Japan, which commands significant recognition (as well as misrecognition) of its aesthetic and cultural contributions in the Western world. So I have been thinking that you can trick yourself into thinking you might be doing anti-racist work, but you still realise that you do it in ways that allow you as an individual to get ahead, rather than in a collective way.

I think part of this interest in, but uneasiness about power, led me to feminism, which informs the research I do – I also research digital feminism. In some ways the appeal of feminism was unsurprising. I always idealised my mum, even though I was a spoiled child and probably didn’t tell her that enough. And during my childhood, she continually insisted on women’s intelligence, know-how and capacity over and above that of men. She loved plaiting my hair and bought me charming dresses, but it was very clear that she saw appearance as a superficial form of evaluation. So, my mum was hugely influential in this research interest.

But I think feminism was also a way of articulating protest against the status quo, something I felt strongly, but didn’t want to always tie to my own ethnicity. I research identity and media: in particular, identity in digital culture and popular culture. What fascinates me about media is that it is both a way of seeing, and being seen. This duality and the questions of how we are visible, and for whom, is something that drives my research.

More recently, I have been trying to bring concerns of race into my work as centrally as that of gender. It brings up some longstanding insecurities. For example, I ask myself why I have not foregrounded issues of race for so long; I ask myself if I am actually ‘getting it right’, or if my perspective is too tainted by the desires I have had to transcend race; desires I want to, but struggle to let go.

But now, all I can do is try to redirect my childhood willfulness, into my current projects. I like to think that even if I haven’t inherited an ‘authentic’ sense of Japanese identity, I have inherited the willfulness –and my surname – from my daring mother, and her father, Gisaku Kanai, my only living grandparent, who lives in Fukaya, Japan. Gisaku, my ‘Giichan’, turned 93 this year, and still lives on his own. He has a daily routine of watching samurai dramas, drinking shochu, and still likes driving fast around corners in his red Audi.

According to feminist and critical race theorist, Sara Ahmed, willfulness is a quality that drives a feminist life: it is an insistence on having a will of one’s own. This insistence is the thread I am holding onto, in terms of my inheritance.